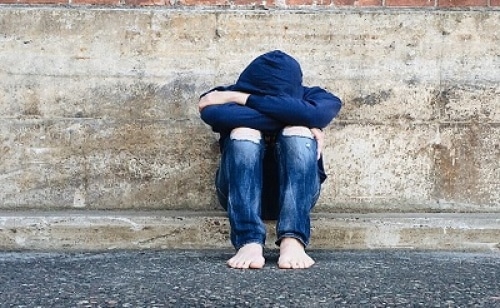 Matan’s mother is an ex-drug addict who had become religious. She does not work. His father is disabled and wheelchair-bound. Matan has an older brother who dropped out of school in order to put food on the family’s table.

Matan arrived at the Rebecca Sieff Centre for the Family Vocational School when he was 16 years old. His mother and older brother accompanied him; Matan appeared thin and anxious and wore a baseball cap pulled low over his eyes. When questioned, he remained silent while his brother answered for him. Matan, who previously attended a Haredi school, was accepted into the 10th grade.

At first, Matan refused to remove his baseball cap and was non-communicative with staff and classmates. His level of education and social skills were lacking. He was a loner and always had a vacant look in his eyes. However, with patience and encouragement, he gradually let down his guard and opened up to his teachers. Matan confided that his disabled and ailing father wakes him every morning at 4 am in order for Matan to wash and dress him before taking him to the synagogue. After opening the synagogue at 5 am and leaving his father there, Matan would return home to wake up his mother and older brother, which explained his tiredness.

In a house call that the school’s social workers made to Matan’s home, they were horrified to find that the family lived in the storeroom of a shop owned by relatives of the family with no kitchen or bathroom facilities. Matan shared a bed with his brother in a small and squalid space clearly unsuitable for human dwelling.

The staff at the Rebecca Sieff Vocational School quickly mobilized to find home care support for Matan’s father and secured a part-time job for Matan in the afternoons. During this time, Matan’s self-confidence grew, and he took off his baseball cap, revealing a new attentiveness and a newfound zest for life.

Matan advanced in his studies. During a leadership course, Matan exhibited the initiative to promote both his class and himself and the ability to lead effectively.

Matan graduated from school successfully; was enlisted into the army and got a permit to continue working in order to help to feed his family.

Today, Matan is happy, confident and progressing well in life. In partnership with his brother, he has taken on a mortgage, which has enabled his family to buy an apartment.