Dalia (not her real name) loves to dance. Whenever she hears music, she jumps from her chair and sways her body as graceful as a swan. “She wants to be a ballerina,” Dalia’s mother explained, her eyes glistening with pride, “And I will move heaven and earth for her to fulfill her dreams.”

It was not so long ago that such aspirations would have been unthinkable. Dalia’s mother looks wistful as she recalls how she had wrapped her petrified six-year-old daughter and her two-year-old son in blankets and bundled them into the taxi in the middle of the night.  A social worker accompanied them on a long journey to the WIZO women’s shelter in Ashdod, far away from her violent husband’s reach and far away from their home, which had become the unhappiest, most dangerous place on earth.

For long days, Dalia cowered in the corner of the room she shared with her mother and her younger brother at the shelter, her body shaking in fear.  In the middle of the night, the screams of her nightmares pierced the silence as the women in the shelter who had been released from their own nightmares finally slept soundly in their beds.

The trained child psychologist who worked with the children at the women’s shelter was very gentle in her approach to Dalia, letting the child open up to her at her own pace. She worked with Dalia on a one-to-one basis, quietly encouraging her trust. The breakthrough came when Dalia timidly reached out and took the cute little teddy bear that the child psychologist offered her. Dalia hugged it tightly to her chest, and asked timidly, “Can I keep it?”

As the psychologist explained, “of course, we treat the mother and her children. The children generally cannot process the atrocities that they have witnessed, particularly when one loved parent attacks the other. We, as grownups, cannot accept it, so can you imagine the emotional damage this has on an innocent child?

With patience and sensitivity, Dalia’s fragile confidence was restored by the child psychologists and the social workers who drew out painful truths and encouraged the child to focus on what she liked to do, what made her smile.  Through music and movement, Dalia was able to express her feelings, and this paved the way for the soothing therapies that empowered this little girl to let go of her fear and the dark emotions that had always clouded her young life.

After their time spent in the WIZO women’s shelter, the family has healed and moved on. The family has moved to a different location. Dalia’s mother has returned to work equipped with new skills and new self-worth. Her little boy is in WIZO Day Care and Dalia attends a local school.  Every week, Dalia attends ballet class and according to her tutor, she has real talent. 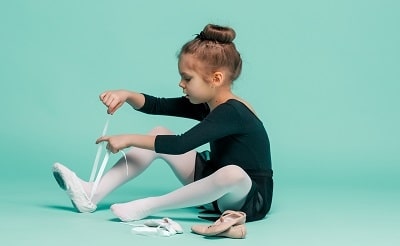 Dalia Loves to Dance. Photo for illustration purposes only

Dalia is just one of the thousands of children who, along with their mothers, have been both protected and empowered by their time spent in WIZO shelters.

These are all children who have either witnessed or been subject to a variety of damaging behaviors and abuse, resulting in deep-seated psychological and emotional trauma. The main goal of the shelters is to provide a safe haven where they prepare the mothers and children for an independent and violence-free life. To this end, the shelters provide group and individual therapies as well as tutoring to assist in any lack in studies. Mothers receive legal aid, therapies for mind, body and soul as well as crucial job training – and the children receive what every child deserves – a childhood far removed from harm.